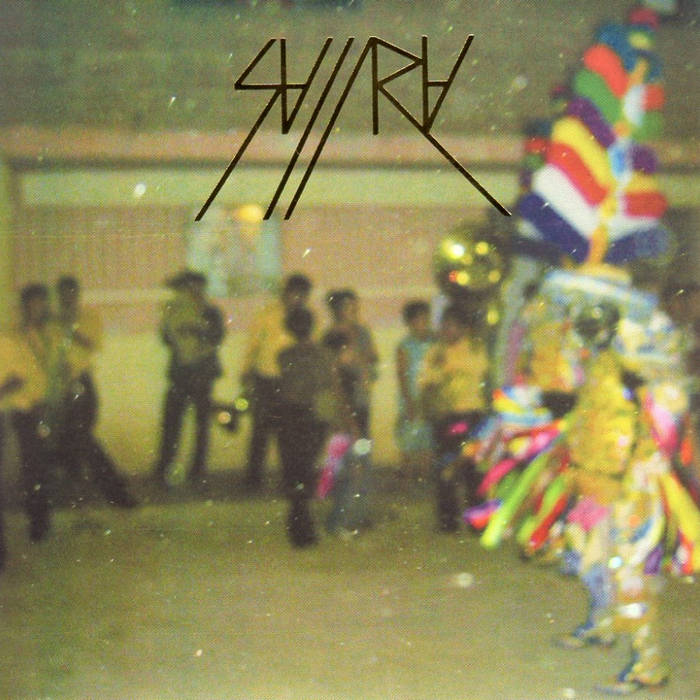 All the tracks recorded in Paris, Nantes, Berlin and The Hague between June 2012 and August 2013, with the collaboration of David Krapoola in the background voices for the track “Flor de repulsa”.

Some quotes from reviews about this album:

"This work takes a certain influence of the Peruvian ritual music, but not being obvious in its sound, the most important is the way that it recreates the mystical, stalking and ceremonial atmosphere of these practices through the brutality and the beauty of the noise."(Blog Latino America Shoegaze,11/01/2014)

"In several songs of the disc we can listen to sounds that seem to come from industrial machines - "Infvierno Blanco", " Flor de repulsa "- or from folkloric processions - "Fascinación" - which with the flirts with the nineties intelligent school - "Emptyreddress", "Dexamor" - or the dreamy voices of pieces like " Brilla en la violencia del verano " makes Sajjra a notable and charming disc, overflowing of genius for all the pores. A gem lost in the time of the millenary pre-columbus apus when our ancestors were learning of the wild, dirty, amoral and real nature how to connect between them and with their environment." (Wilder Gonzales Agreda, Blog Peruavantgarde. 29/01/2014)

«this debut album contains some intriguing tracks. The first track is somewhat reminiscent of music from the early days of the Swans and later Sajjra seems to hook up with contemporary sound artist as Laurent Perrier. However Sajjra has above all its own style with its stacked, distorted (guitar) sounds, repetitive rhythms and sound collages where sometimes a song comes to the surface.» (By Rob Vugs , Gonzo Circus – The Netherlands. 08/2014)

"A bit of rhythm, some guitars, keyboards and vocals may sound pop-like, but it's perhaps not really pop-music yet. That seems to be the case on the release as Sajjra. You can hear Galarreta plays with the notion of pop, but these seven pieces are not structured like a pop song, yet. It has all the ingredients for sure, but the loose structure of the pieces sees him toying around with ideas and not thinking about those great pop songs they could be. But for all I know this could entirely be the intention of Galarreta? It surely has a dark feeling to it, which might appeal those who like angst-pop and beyond. I didn't think this was bad music, far from it; I played it with great interest and enjoyed it quite a bit. The Dutch weather is grey and it drizzles all day, so it needs a soundtrack like this."(Frans de Waard, Vital Weekly 955. 04/11/2014)

"If I had heard this disc on time, for sure I had included this release as one of the best of last year, but unfortunately it was not. Somehow or other, I discovered Sajjra at the beginning of this year, and I could not shake the idea that I was facing to a great album. This is one of the many projects of the experimental musician Christian Galarreta,emblem of the noise and avant-garde music in Peru." (Mauricio Mavel,El Blog Del Bam.15/07/2014 )

C.G.- Sajjra music is the music for the summer in some traditional Peruvian celebrations. It has relations with noises of nature and with taking risks in the night while going to great natural phenomena, like cascades. These natural elements contain the Supay, which could be the demon for Christians. Supay will teach the people how to play their music. They find Supay in the darkness, in danger. Then they return and sleep, supposedly they dream and then play with their instruments the music and tones they heard in their dream. It is an extrapolation of noises that through the dreams become melodies.

I especially love the sound of the word Sajjra. We used this word before with my collective Aloardi for the title of a sound installation. Because we found the manifestation of Sajjra in the chaotic behavior of the urban context, a hidden wildness in the domestic world.

For me Sajjra has also to do with a saturation of light, a light that makes you feel high. In some songs and in some sounds I try to get a sensation that I see in this light; I like to feel it strong. It is a feeling of pleasure through the pain. The pictures for this Sajjra release refer to this sensation of light. It was at a celebration in Huánuco, Peru. There is a lot of light through the darkness, and a lot of colors, a lot of music. I was fascinated! When I listened to their music, I was always thinking I like to make stuff like this. Their textures remind me of this sensation of over saturation.

J.vdP.- Sajjra is also a feeling and presence that roots oneself. It is a ‘front’, a beginning in the inner personal state, a foundation. In the front cover you see the figure looking to the left, to the past. It’s a vague picture, he looks towards the title, Sajjra. The figure looks into the blurriness of a dream. He stands still, digesting and facing his past.

The backside of the cover is more a surface, like the clarity of a beauty. It concretizes the CD as an object- it is the reality of a checklist, with the song names. Here the figures walk to a ‘future’. They are on the line. But there is also a reminder, in the flash of a ‘walking shadow’ going back into the dream or in the emptiness outside the frame: you see in the left corner the colored strings disappear. In the centered background, against the wall, is a group: they are the music. They are there, like the ever-present and loving family, representing the eternal musical flow, on the side, that don’t go anywhere, but are moving with you.

C.G.- These dressed up people I photographed are warriors
to me; they are dancing the process of a sometimes heavy background representing the community. They are charged with their heavy costumes also, with the music starting again and again, going in cycles. You can feel this new-born rhythm in the release in the song ‘Dexamor’ for example.

In the first song, Infvierno blanco, I was working with monotonous structures, with straight monotonous rhythms. I like the sounds of the machines. I think they are very wild when they are monotonous. I connect it with a Andean dance where they just make these singular rhythms for hours, all the day, with a lot of people playing this tone, very percussive and all at the same time but with different pressures and with microtonal differences. It gives a psycho-acoustical effect in your brain. I am inspired by traditional music dealing with these elements. Maybe they are an influence; I feel very happy that this is in my blood, even if I don’t listen to it everyday.

Pictures takes by Sajjra in the Negritos de Huánuco celebration (Peru, January 2010), thanks to Renzo Fabian and his family. Cover art & text by Sajjra and Janneke van der Putten. Published by Aloardi, October 2013. Alo055
Distributed in Europe since April 2014.

* ‘Into The Light’ by Siouxsie And The Banshees

Sajjra’s sound has the atmosphere of the slow and heavy Andean processions, keeping the spirit of their traditional music ensembles. But Sajjra also expresses the mesmeric feelings, that gives his birth-town Lima. Andean tropical psychedelia.

Bandcamp Daily  your guide to the world of Bandcamp

Exhumed and Gruesome's Matt Harvey checks in, with jams from Cannibal Corpse, Midnight and more